How much can a scouting visit tell you about a prospective place to move that your online research either can’t or won’t reveal? A whole lot! To illustrate this point, I’m highlighting 13 eye-opening discoveries I made on my recent scouting visit of Eugene, Oregon that did not surface during my online research.

Online research can yield a lot of information about a place, but it’s sketchy and one-dimensional. It’s like the outlined pictures in a coloring book before they are filled in. A scouting visit provides the colors that allow you to fill in significant details about a place that may have been previously ill-defined or unknown.

Your scouting visit take-aways can also lead to an even deeper dive with your online research, so that you learn more – both positive and negative – about a place you’re considering moving to. Like getting to know someone well before you marry them, you want to get to know as much as you can about a place before you move there.

So, what did I learn about Eugene on my scouting visit that online research did not reveal? Some of these discoveries may surprise you!

Tax rates were not a priority characteristic on our ideal place profile, so I didn’t learn that Oregon is one of 5 states that do not collect sales tax until my scouting visit. (In case you’re curious, the other sales tax-free states are Alaska, Delaware, New Hampshire, and Montana.)

This was a welcome surprise, especially since I’ve always lived in states that collect sales tax. For example, the sales tax rate in Washington County, Iowa is 7%. While it’s definitely a perk not to have to pay sales tax, it’s important to note that Oregon has one of the highest state income tax rates in the U.S.

You can check out sales tax rates by state here and by Canadian province here. To get an accurate rate for U.S. locations, be sure to add any additional city and/or county sales tax.

Driving around Eugene, it became clear very quickly that the city has a ton of one-way streets. This can be helpful to keep traffic flowing, but it can also be a little clunky trying to get around when you’re not familiar with the layout of the city. I would have been completely lost without the GPS on my phone, even though it wasn’t always reliable. When I did some more research, I learned that Eugene was the first city in Oregon to have one-way streets. That explains why they like them so much!

Low-ish property taxes (a lesson in perception vs. reality)

After listening to the owner of the Airbnb where I stayed complain bitterly about Eugene’s high property taxes, I decided to check the facts. Which were eye-opening to say the least!

It’s mind-boggling how much higher property taxes are in a tiny town in Iowa than in the second-largest city in Oregon! And it’s amusing that, no matter where you go, it seems people like to complain about how high their property taxes are – even when their rates are comparably low!

Grab the free PlaceFinding Cheat Sheet, a comprehensive reference list designed to help you gather all the information you need online, so that you’re better equipped to decide which places to investigate further in person.

Homelessness is unfortunately a serious problem in many cities, including Eugene. In fact, Oregon has the second highest rate of unsheltered homeless people and the third highest rate of chronically homeless people in the country. About one-third of Oregon’s homeless is in Portland. Eugene locals speak of bit disparagingly of Portland and its homeless problem, but I also saw a lot of homeless encampments in Eugene. Annual Point-in-Time Counts show the number of people experiencing homelessness in Eugene/Lane County increased from 1,529 in 2017 to 2,165 in 2019. That’s a 42% jump in two years!

You can learn more about Point in Time Counts by location in the U.S. here and in Canada here.

A love of signs 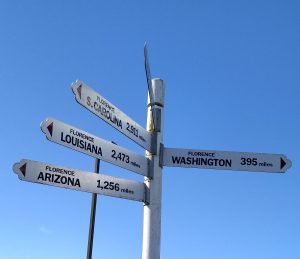 It was apparent from my scouting visit that Eugene residents love their signs! I noticed a lot of signs around the city that said, “Choose Kindness.” How can you argue with that sentiment? Many signs were refreshingly silly, from “Now open. Beer colder than your ex!” to a sign for tie-dyed clothes that read, “Made by REAL hippies!” Most signs I saw were indicative of the warm, friendly – and funny! – people I met on my scouting visit.

Directional signs like the one on the right here are especially popular. I noticed this silly sign while walking around the coastal town of Florence. Then, on the road from Newport to Eugene on Highway 20 East, I saw a sign that read: Boston 3,365 miles. I found out later that Highway 20 has the official designation of “America’s longest road” and that it does indeed end up in Boston. 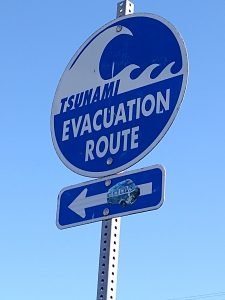 Speaking of signs…how about this one?

Signs warning you to immediately head inland or to higher ground in case of an earthquake were ubiquitous on my day trip to the coast. Tsunamis can travel as far as 10 miles inland. Fortunately, Eugene is 60 miles inland!

Just how often do earthquakes and tsunamis happen in Oregon?

According to the U.S. Geological Service website, Oregon’s most recent 4.7 and 4.9-magnitude earthquakes took place offshore in summer of 2004 and did not produce any tsunamis. The most recent tsunamis occurred along Oregon’s coastline in 1960 and 1964.

A high-priority characteristic on our ideal place profile was that it had to be tornado-free. Oregon and Washington are the only two states that do not get tornadoes, which helped to narrow down our possibilities considerably. But it just goes to show there’s always going to be something to worry about, so pick your poison!

Click here to get information about earthquakes across the U.S. and the world.

We currently drive 60 miles round trip for vet appointments. This can get pretty dicey with four cats and a rabbit. We were hoping Eugene had a mobile vet, but my online research did not turn up any. Disappointing, but not a deal breaker by any means. Fast forward to my scouting visit. I’m walking down the street and look up to see – a mobile vet van! Upon further research, I found at least two cat vets that make house calls and one that cares for rabbits. It’s a relief to know our four-legged family will be well cared for in Eugene!

Eugene’s funky airport reminds me of the now-defunct Robert Mueller Airport in Austin, Texas. Like the old Austin airport, the Eugene airport is super low-key and so small, you can park and walk across the street to the terminal. This means airfares tend to be higher into and out of Eugene, but it’s worth it for the convenience and reduced stress.

Like tax rates and earthquakes/tsunamis, allergens were not a priority characteristic on our ideal place profile. It wasn’t until I started talking to people on my scouting visit that I discovered the Willamette Valley region (where Eugene is located) has some of the highest grass pollen counts in the world. Hopefully, we’re not allergic to grass pollen. But even if we are, at least we’ll be in a place where we’re actually living instead of just existing. 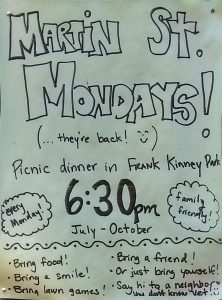 Eugene’s sense of community is palpable. People are overwhelmingly open and friendly. They seem to actually give a shit. This observation was confirmed when a long-time local told me that people in Eugene are resistant to change and love to protest! Another long-ti me local told me about a huge annual block party that takes place in the South Hills neighborhood. Eugene’s community-mindedness was also evident on signs posted around town for events like a benefit for a neighborhood grocery store and a weekly neighborhood picnic dinner. Scouting out Eugene gave me the opportunity I could not get from online research alone to fully experience and appreciate its sense of community firsthand.

Iowa drivers are aggressive and in a giant hurry all the time. They honk if you don’t immediately go when the lights turn green and they tailgate to try to make you go faster. Driving around Eugene was a completely different experience. Drivers were courteous. Nobody honked or tailgated. “Rush hour” is not a thing. Highway 5 between Albany and Eugene was one of the most chill interstate experiences I’ve ever had. Overall, the speed limit is lower in Oregon. Eighteen-wheelers on the interstate tend to stick to the right lane because their speed limit is 10 miles slower. As a result, driving feels safer and less stressful. What a refreshing concept!

Eugene sits in a valley surrounded by gobsmackingly gorgeous mountain ranges and evergreen forests. While I’d seen plenty of photographs, none of them fully captured what I saw with my own eyes and experienced with my senses. Scenery is one of those things you have to experience firsthand. No amount of virtual exploration is going to give you a full and accurate interpretation of your surroundings.

Why scouting visits are a worthwhile investment

Scouting visits are well worth the investment of time, money and energy they require because they can play a pivotal role in helping you avoid making an expensive and hard-to-fix moving mistake. You want to get familiar and comfortable with a place before you make a commitment to pull up roots and move, so you can feel confident you’ll be happy in the place you choose.

Getting to know a place online is nothing like scouting it out in person. By getting eyes on the ground, I was able to both confirm and supplement our online research findings and to establish Eugene, hands-down, as our best place to move. We finally found the place we’re meant to be and are making plans to move – and the scouting visit is what sealed the deal!

Ready to find the place you’re meant to be, too? Let’s talk!

How Midlife Made Me Lose My Mind and Find My Purpose