Where should I move? Which is the best place for me? Where will I be happiest living? Chances are if you’re asking yourself these questions and have spent any time researching online, you’ve seen the lists. You know the ones I’m talking about. Best Places to Live! Best Places for Singles! Most Affordable Places! Best Places to Retire! And so on.

We’re accustomed to rankings. They shape many of our everyday decisions, from which restaurants we try, to which hotels we stay at, to which products we buy. The thing is, choosing where to move to is not an everyday decision. It’s one of the most important and expensive life decisions we make – one that affects the people we meet, the work we do and our overall happiness.

Learn how you can get a detailed Top 10 Places to Move report custom-researched to YOUR specifications, along with  tools and one-on-one coaching to optimize your scouting visits and make the best decision with PlaceFinder Premium.

We can opt to not go back to a “best” restaurant or hotel or to return a “best” product when they don’t work out. But, course-correcting a move to a “best” place gone awry is a lot more complicated.

The elements that influence where we choose to move are incredibly personal and nuanced. Deciding which place is right for us requires careful reflection, research, consideration and planning.

Where a place ranks on some random list is irrelevant.

“Best” places to live lists may seem innocuous. But they are really insidious, gimmicky works of fiction that do nothing but distract and mislead under the guise of being helpful. When taken at face value, they can do much more harm than good.

Since I’m not able to get rid of these ridiculous “best” places lists, I’m going to do the next best thing: call them on their shit while giving you reliable alternatives to keep the search for your dream location on firm footing.

Exactly why are “best” places lists totally bogus? Let me count the ways.

Have you ever wondered how places get ranked on “best” lists? A review of list-manufacturing methodologies shows that places are ranked based on an impressively unscientific mystery blend of select statistical data (some from reliable sources, others not so much) and public opinion.

In other words, it’s a popularity contest.

The places with the most favorable votes in the polls win a coveted ranking on a “best” list. Just because a place gets a bunch of “likes” in some poll doesn’t mean you’ll like it too. What other people think of a place, whether you know them or not, is irrelevant.  Not only that, giving weight to their opinions can put your search for a compatible place to live on shaky ground.

It’s a feather in a city’s cap to be ranked on a “best places” list. Such a nice, shiny feather, in fact, many cities will pay for a ranking. Do you really want to move to a city that shells out money in an effort to convince people to move there?

“Best” places lists assume we’re one-dimensional blobs rather than multi-faceted individuals. Because public opinion is such a central part of their ranking formula, they believe if enough people give the thumbs up on a particular city or town, other people will naturally love it too.

News flash, list manufacturers, this is not Invasion of the Body Snatchers and we are not pod people!

Finding the right place to live means finding a location that’s compatible with your individual needs, preferences, goals and priorities. It’s like finding the right partner. You’re the only person who knows the exact qualities you’re looking for. It’s by focusing on these qualities–not dopey lists that focus on what other people believe is important–that you’ll find the place that’s right for you.

“Best” place lists are an insult to our intelligence as well as our individuality. List manufacturers gather up a few statistics of their own choosing, mix them in with a healthy dose of public opinion and, presto, you magically have all the information you need to decide where to move. They want you to marvel at how simple and effortless it is–just slap a ranking on a handful of places and you’re good to go!

No need to break a sweat or even–gasp–think because they’ve done all the work for you.

Contrary to what the list manufacturers want you to believe, choosing where to move is not a decision that lends itself to quick and dirty “hacks”. If anything, so-called shortcuts like these put you at greater risk for making a wrong move.

You’re better off ignoring these vacuous lists. Instead, devote your time and energy to reflection, deliberation, planning and research, so that you can reap the rewards of a successful move.

Why give those dopey homogenous lists any oxygen when you can get your very own detailed Top 10 Places to Move report custom-researched and prepared JUST FOR YOU in only 30 days with PlaceFinder Premium?!

Have you noticed how many different media outlets have hopped aboard the “best” places list bandwagon? What’s really weird is they all contradict one other because they each put their own spin on the same asinine methodology.

For example, the best place to live could be Austin, TX (U.S. News & World Report) or Ann Arbor, MI (Livability) or Carmel, IN (Niche). These same outlets respectively rank Sarasota, FL, Walnut Creek, CA and Whiskey Creek, FL as the best place to retire and Huntsville, AL, Lansing, MI and Brackettville, TX as the most affordable place to live.

Your best bet is to channel Fox Mulder and “trust no one” who is churning out these sketchy lists. Not only are they meaningless, they detract from what’s really important.

Next time you see one of those silly lists, tune it out and focus instead on exactly what a place needs to have to support the life you want. Then, use this information to guide your search.

Ready to jumpstart the search for your dream location?

Learn how PlaceFinder Premium can help! 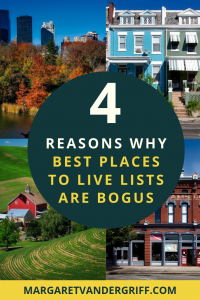 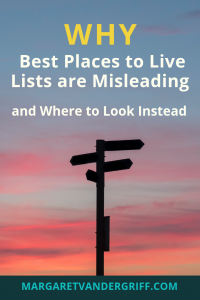 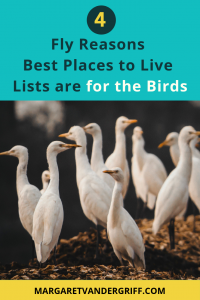 5 Mindset Strategies to Ease Your Search and Move